Interview with Marbecca from Verbotene Liebe

Posted on 5. Oktober 2012 by Gastautorin in kulturelle, TV 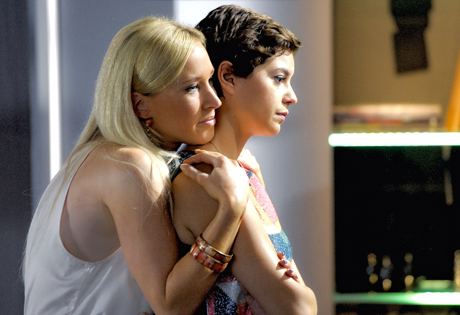 phenomenelle guestauthor Lisa Wischer had a chat with actresses Melanie Kogler and Tatjana Kästel about their roles as lesbian couple Marlene and Rebecca von Lahnstein in the german soap Verbotene Liebe (Forbidden Love).

Melanie, what was your first thought when you learned about the love story between Marlene and Rebecca?

I have been looking forward to the story. It is a very exciting experience for me as an actress.

Tatjana, after six years of acting in theater, this is your first TV role. Was that, along with Rebecca’s lesbian orientation, a double challenge?

Certainly, the work in front of the camera was a new challenge for me but I have chosen this task deliberately. It was unusual that my character has fallen in love with a woman but there was no further challenge.

Did you have a say in the creation of your film character, or has the story been imposed on you?

Tatjana: Since I have started Verbotene Liebe with this story, my determining influence was limited. However, I can also contribute my own suggestions and ideas to the work.

Melanie: We always interact with the authors and, of course, often exchange ideas.

Tatjana, have you cut your hair especially for this role? Why has that been asked for? Because it would have fulfilled the stereotype of a lesbian better?

No, we didn’t want to support this cliché at all! We thought the short hair matched the new Rebecca quite well. It emphasizes her new self-confidence, her love of experimentation and also a certain clarity.

Do you feel comfortable with your new hair cut?

Yes, although I think I will grow it long eventually.

Have you prepared particularly for the character? Have you, for example, done research on lesbian love or talked to lesbian women deliberately?

Tatjana: No, not deliberately. I don’t think that would have helped me act more authentically. The feeling of falling in love with somebody is the same for everyone so I chose to draw on my own experiences.

Melanie: I have lesbian friends who are engaged, so that subject was not completely new to me.

Have you watched the old lesbian stories of Verbotene Liebe? For instance the love story between Erika and Nina, or Carla and Hanna?

Tatjana: Not in particular. But back then I had watched Verbotene Liebe every now and then and picked up on the story.

Melanie: Of course the stories are in the back of my mind, but I try not to be influenced too much by them but rather tell my own story.

Is there a difference for you if, as an actress, you kiss a man or a woman?

Tatjana: I have been asked this question so often, and all I can say is: For me it doesn’t make a difference as an actress.

Melanie: Practically there is no difference for me either. I only had to get used to my film partner’s wispy physique in the beginning.

Why did you decide upon film kisses? Wouldn’t have real kisses given more credibility and intensity to the story?

Melanie: We decided for the most common option considering the broadcasting time and format.

Tatjana: No, but I think most colleagues don’t like doing them.

Melanie: Every love scene is a challenge, but the better you know your film partner, the easier it gets.

How do you get along with each other personally?

Melanie: We also get along well with each other outside the acting studios. I very much appreciate her as a person and colleague.

Have you expected such a big response from the fans? “Marbecca” is the number 1 topic in a lot of fan forums and on video platforms.

Tatjana: No, I haven’t expected that. Of course I am very happy that this love story thrills so many viewers.

Melanie: The huge response has surprised me a little, but I am, of course, happy about it.

Melanie, have you attended this year’s Cologne Pride? How was it?

I attended the parade for the first time on one of the floats in the parade  and that’s why I enjoyed it thoroughly.

Have your perceptions of homosexuality changed through the development of your film characters?

Melanie: No, because I have always believed that one falls in love with the person and that gender is not the most important thing.

What can the fans of “Marbecca” look forward to in the near future?

Tatjana: To a lot of nice things.

Melanie: To a nice love story.

5 thoughts on “Interview with Marbecca from Verbotene Liebe”

This website uses cookies to improve your experience while you navigate through the website. Out of these cookies, the cookies that are categorized as necessary are stored on your browser as they are essential for the working of basic functionalities of the website. We also use third-party cookies that help us analyze and understand how you use this website. These cookies will be stored in your browser only with your consent. You also have the option to opt-out of these cookies. But opting out of some of these cookies may have an effect on your browsing experience.
Necessary immer aktiv
Necessary cookies are absolutely essential for the website to function properly. This category only includes cookies that ensures basic functionalities and security features of the website. These cookies do not store any personal information.
Non-necessary
Any cookies that may not be particularly necessary for the website to function and is used specifically to collect user personal data via analytics, ads, other embedded contents are termed as non-necessary cookies. It is mandatory to procure user consent prior to running these cookies on your website.
SPEICHERN & AKZEPTIEREN